The Mutant Bear appeared in the 2018 sci-fi horror movie Annihilation. It's presumably an American black bear that has been mutated from the "Shimmer" that the bear resides.

The Mutant Bear seems to be an American black bear (Ursus americanus) although slightly larger than its non mutated brethren, initially when Lena's team is ambushed by the bear, the bear seems to retain its pre-mutated form save for patches of skin showing around its neck and head where it's fur had withered away.

When the bear reappears when Anya interrogated her teammates, the bear reappears to torment the group although it has been heavily mutated within the gap when it first made contact, while it's body is largely unaffected/mutated to less of a degree, the skull of the bear is now visible, showing the lack of flesh on the bears skull, the bear's nose has also withered away, leaving the nasal cavity open however the bear has a human's skull embedded into its own, human teeth are seen inside of the bear's mouth as a second row while still retaining its own set.

The bear initially is shown to stalk the group while they rested at Fort Amaya, tearing a hole in the fencing perimeter before swiftly grabbing Cass Shepherd, dragging her away from the group while she screamed for help, interestingly while Lena found the grisly remains of Cass in the morning after, the bear didn't outright eat her, possibly leaving her body as a warning for the group.

While Anya began interrogating her teammates, the weak, croaked calls of "Help me" distracted Anya, as if Cass somehow miraculously survived such an attack, however the bear was the source of the calls which his heralded with an ever so familiar bellow. While it circled around the bound trio, it seemed to constantly fill the air with bellows and the dying cries of Cass screaming "help me!" as to instigate a reaction from the trio, going as far as to "Stare down" Ventress before clamping onto her shoulder as to break her, before it could further torment Ventress, it was alerted by Anya firing away which was quickly dealt with by ripping her jaw and throat apart, before it could give the same treatment to the survivors, Ventress was swift to gun it down, ripping it's skull apart with a hail of bullets.

The bear staring down Ventress during the interrogation scene.

the right side of the bears head 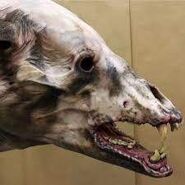 the left side of the bears head
Add a photo to this gallery
Retrieved from "https://galactic-creatures.fandom.com/wiki/Mutant_Bear_(Annihilation)?oldid=48917"
Community content is available under CC-BY-SA unless otherwise noted.